Linda’s ClipperTelemed team is tacking down the east coast of Brazil, neck-and-neck with Visit Seattle, 547 miles from the leg one finish line in Rio. The team is on track to finish on Wed Sep 30 given current pace.

Four boats have made it to the finish in Rio. LMAX Exchange won the 5,968 mile leg from London, arriving Rio on Friday and followed by Qingdao late Saturday. Great Britain drifted across the finish today (Sunday) just 0.8 miles ahead of Derry Londonderry.

The trek through the Doldrums was relatively uneventful, thankfully, followed by some steady breeze and upwind sailing as they headed south to Brazil. Here are some highlights of the past few days:

– Don’t Mess With King Neptune: Day 24 triggered the arrival of an angry Davey Jones and King Neptune, who punished those for crossing the equator. All but one of the ClipperTelemed crew were polliwogs (first timers) and sentenced for their crimes. Marmite and flying fish were involved.

– The “Flying Fernandos:” A flock of five birds followed the team for days since passing Fernando Island. They hopefully said their goodbyes before the “bird taco” talk got too serious.

For more, track the fleet’s progress into Rio and check out the daily notes from ClipperTelemed crew and skipper Diane Reid.

Track the fleet on the live Race Viewer 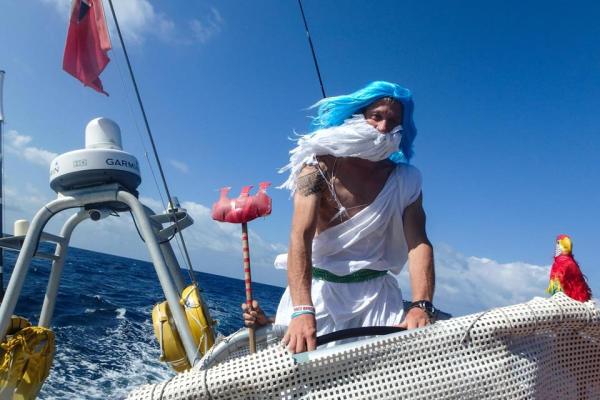 A well-fed skipper is a happy skipper