It’s Day 9 on the way from London to Rio, with the fleet hugging the African coast for better breeze and current, passing through the Canaries and into the Doldrums.  The teams found some great downwind breeze mid week, with gusts over 40 knots, sustained winds overnight of 30-35 knots and 20 knots boat speed surfing.  This was followed by some light air as teams split the route around the Canaries. The fleet should arrive in Rio in about three weeks, around September 30th.

Here are highlights so far. Follow Linda’s ClipperTelemed+ team on the live Race Viewer and check out the daily team diaries.

Kitemare. ClipperTelemed’s medium kite blew up at the start, leaving a bit of a “project” for the crew to repair. After days below at the sewing machine, “Our Long National Kitemare” is over.

Happy Hour. The time when the entire crew eats lunch together (sans vino), the watches swap, and the team spends time on any boat-wide discussions like “please don’t hang your underwear above my head as I sleep.”

Wildlife. Turtles, Dolphins, Squid and the glitter of the green phosphorescences on the black night water.

For Andy: The fleet was shocked and saddened by the death of crew member Andy Ashman on Saturday (Day 5). Andy, a paramedic and a watch leader aboard Team IchorCoal, was involved in reefing the main sail just after midnight local time in a strong breeze and was knocked unconscious by the mainsheet and possibly the boom. Despite immediate medical assistance onboard and via satellite phone, Andy failed to regain consciousness and the boat diverted to Portugal, 120 miles away.  On Wednesday (Day 9), IchorCoal officially resumed the race after the team’s unanimous decision, which had the full support of Andy’s brother Keith. Here’s the official statement. 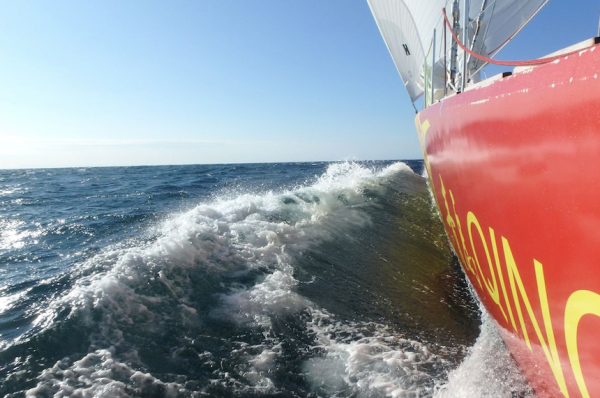 3 thoughts on “Day 9: Through the Canaries”