My next adventure was a bit different. I am redoing leg 8 of the Clipper race so I can officially cross the finish line in 2018.  So my next UK sailing adventure was with my skipper Dave Hartshorn and some of Team Greenings.  I did level 4 training with them and also with some of the Dare to Lead crew (their skipper had resigned and not yet been replaced so they were put with us.  Our Skipper, Dave Hartshorn is one of the best Teambuilders I have had the privilege to work with.  A retired UK constable, he was in charge of security for the London Olympics and Prince William and Kate’s wedding.  I had him for my level 2 training back in 2015 and he was one of my  favorite trainers so I was elated to be on his team.

Level 4 was fun as David made sure we were all included and it was a small test of some boat rivalry besides being out against the other clipper boats in training).  It was fun telling secrets and answering questions about what to wear, what to expect, etc.  One of the things Dave is really keen about is safety on the boat.  We did lots of different scenarios of possible issues and I got to star in one…I was to go forward and trip and go unconscious.  It was an academy award performance and the 2 docs on board were both getting really worried when they could not wake me up.  Seems if unresponsive they pinch your earlobe.  Of course, I did not know this and they really did a number on my ear.  Even Skipper Dave thought I was out when my ear started bleeding.

During training I also was able to see and utilize the ice cream boat that I had heard about so often in 2015 trainings but had never seen. 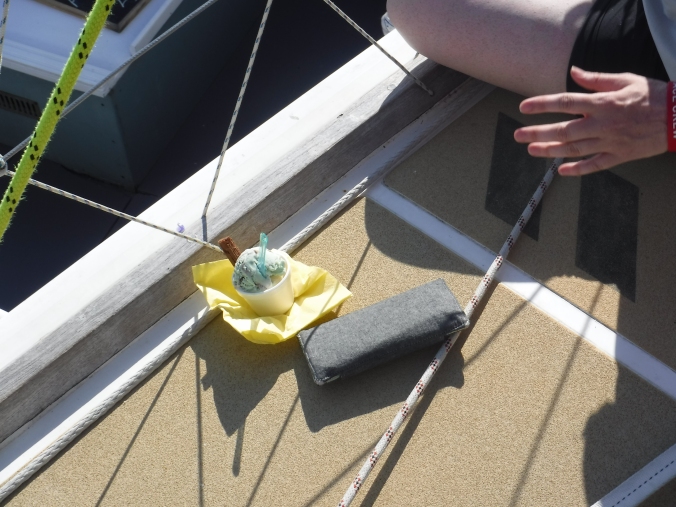 Level 4 race to France …a bit of no air and finally cancelled so we could get back to docks. 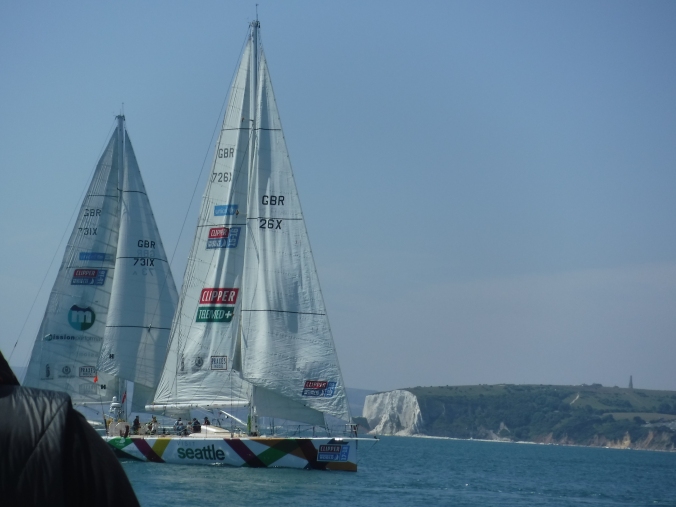 Next I spent some time with friend Jen and then in London with Judith, Jo and Annie from Telemed.  Also was doing online course on Day Skipper Theory about tides, etc and planning courses.  And finally completed February 20, 2018.  Note to self…never take a course online.

Then Jen and I took the Day Skipper practical on the boat and learned some amazing ways to use tide and wind together.  I am really fascinated with Tides!! And figuring out how to plot a course using tide in the most effective way.  One of the exercises we did was using strong tide vs. strong wind coming from opposite directions with no sails up to capture a mooring.  I felt like a true cowgirl when it was my turn to lasso the giant mooring.  My mooring skills were good once I remembered I was not on a lake in a J22 and thus could not just head at the mooring ball.

Setting up our course.

Jen at the helm 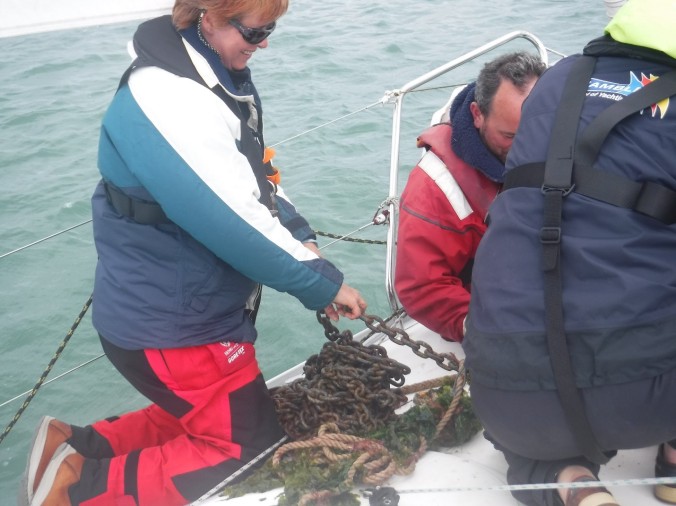 Retrieving an anchor that has been at the bottom of the sea for a while…we have become a salvage team.

My percussion friends thought you might enjoy the name on the blue side cover.  Amazing what one sees out in the harbors. 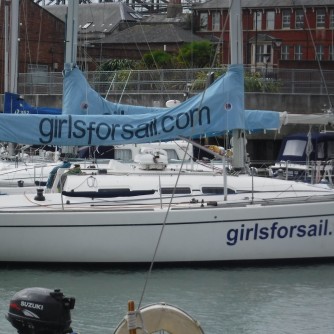 And these in harbors we docked in.  Interesting names?

From there we did a day at Jen’s with a side trip to St. Alban’s Cathedral to hear friends from St. Mark’s Episcopal Church in San Antonio sing.  Also met up with 2 Ex-Judson students who are married and now live in London, an ex-student from MacArthur in the choir, several more good friends that sang in the choir and Clipper Telemed crew member Elaine.  Dined in the Oldest PUB!

Christina, Anais, Penny, me, Jen and Elaine.  Sad Maren couldn’t make it but she had tickets to Les Misérables.

Then early morning train to Gosport to help Team Greenings prepare boat for trip up to Liverpool for start of 17-18 race.

Don, who was our Team Coordinator was incredibly organized and we started out with a common house for all to stay in during the training.  Already meals together and living together.

Seems that I remember doing this a few years ago.

Seriously what was I thinking!! Was great to be back “in the saddle again” though.

Below, Toni, Victualler for race in confusion.  Second time I got to help at the start with the food.  More fun since I knew what I was doing this time. 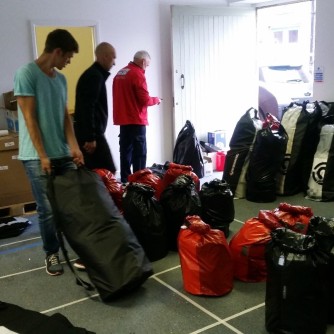 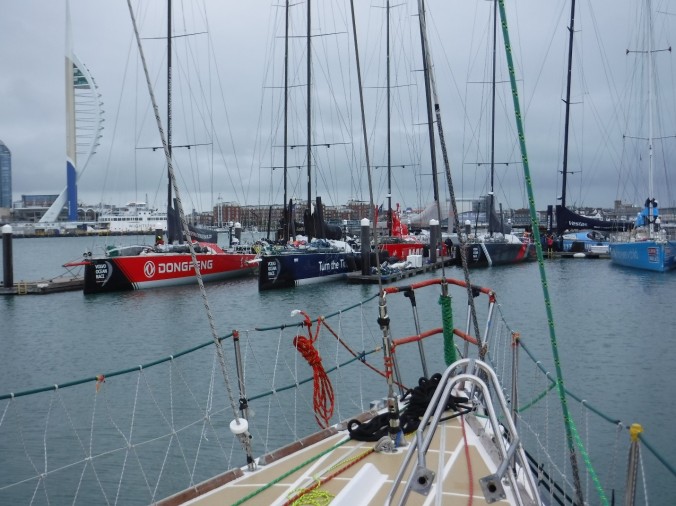 The Volvo Ocean Racers sharing the harbor with Clipper and our Fastnet boat.  Really fun to watch them working on their boats and going out practicing every morning.

The race starts………then tragedy….Leg 1 just off Portugal….Skipper Dave is injured during a gybe and med-avacated off the boat for hand surgery.  Good news, Dan comes aboard to fill in for Dave and though they start behind, with the time given for the emergency stop they manage to win the race!!!

Then Skipper Andy from our Fastnet race comes aboard to take the team for leg 2 and 3 while they wait for Dave to return in good shape.  Leg 2 they win again and also break the record on most miles sailed in a 24 hour period!!

This was a picture they took while figuring out why their speed had dropped in Leg 2.  Got most of it off and went on to win!

Start of leg 3 from Cape Town on Halloween and Team Greenings discovers what ghosts and goblins can do.  Around midnight they suddenly go aground.

The team evacuates the boat safely and go through a massive investigation as to what happened.  No one is talking until the official report comes out other than to say “It doesn’t matter who was at the helm, everyone was safe”.  Final report still not out as of this writing. 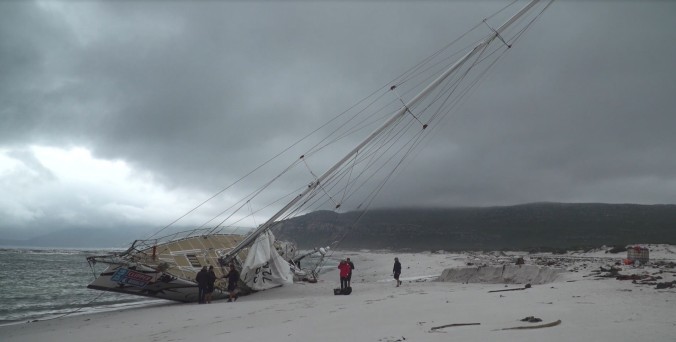 Crew going to get sails, anything that might be salvageable that they can help move and their personal belongings off. 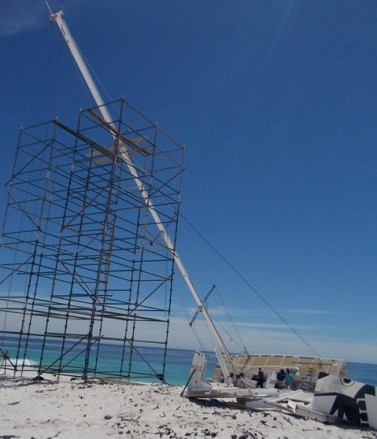 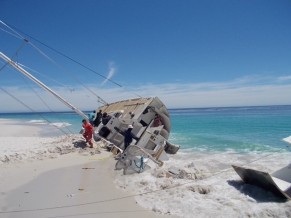 The beach was a protected beach so big machinery could not go on it.  Therefore Greenings was cut apart to remove her.  Very sad and many of us shed tears as we saw the pictures.

The good part… I have met some really great people again and discovered Greenings International, a great company that lives up to its slogan “Value Through People”.  Even with our mishap they have been behind us as individuals all the way and are still supporting the Clipper race.

Some of the crew that I will miss being with now that we have worked together (friends from Greenings if your picture is not here it doesn’t mean I won’t miss you.  I just do not have a picture to share yet.) 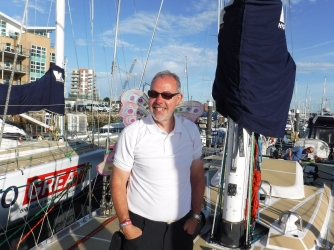 Derek raising for funds for cancer in memory of his wife.  Even bought a star in the constellation for her. 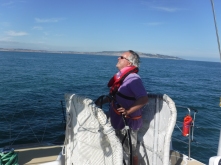 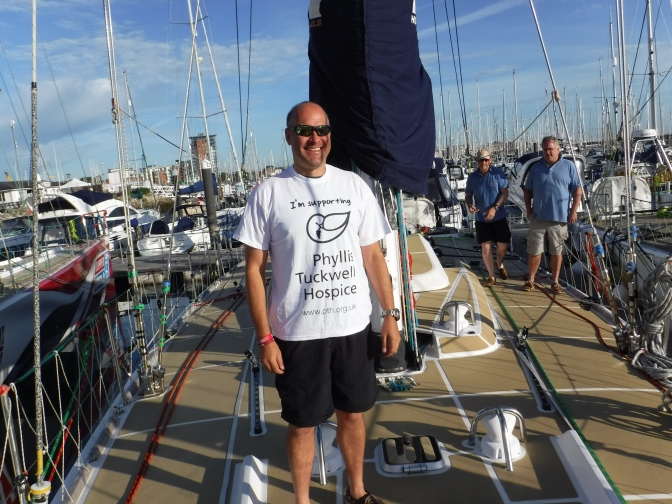 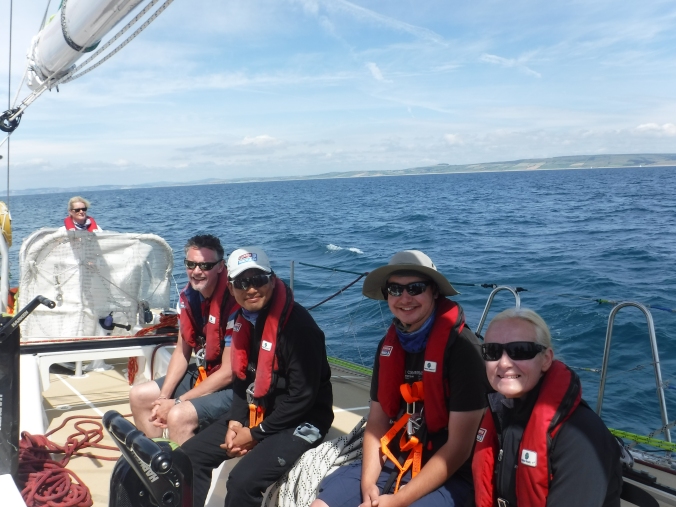 Derek and Toni….yes they are a fun bunch!

All the team was scattered among the other 11 boats.  Now I am on Nasdaq for leg 8 with 2 other Greenings team members.  It will be interesting getting on a boat that I have not met the skipper or crew yet.  Hmmmmmmmmmmm.  Life is always an adventure.  If stock market goes down…not my fault! 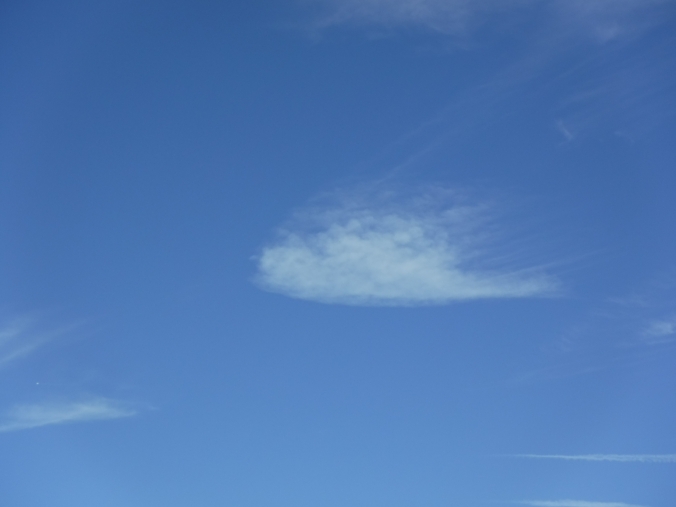 my fascination with clouds… and what does this appear to be to you?  Flying fish, bird, plane, ……… 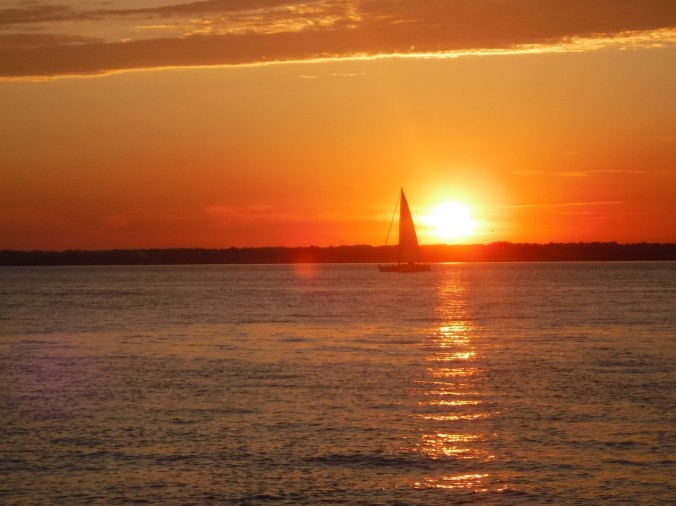 Amazing beauty to end this saga with.