Time spent in Derry weather wise was like living on the Pacific Northwest coast.  Lots of cloudy, drizzly days.  But our day of departure turned out mostly sunny and no rain.

A choir meets on the dock as we prepare to depart and sings for us.  They even did a moving version of “Danny Boy”. 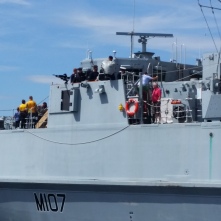 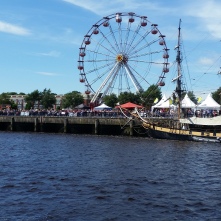 Then our usual parade of sail around the harbor and finally up the Foyle river.

Once again we were treated to the bagpipers and drums but this time they included a youngster that one day will lead the group.  Our last pass by of the docks though they had Opera playing over the loud speaker.  Very different but enjoyable (at least for me).

It was great to see the people lined up along the shore to wish us well as we left.  Even good friend Irish Paul managed to get my attention as he shouted my name when we went by where he was standing decked out in his Irish green.

Good friends Sue and Danny, their twin girls and one of their sons out by Greencastle where we started the race to see us off.  Wonderful people!

Then the race started.  A normal committee boat and buoy start.  I got to call trim on the staysail with Alex calling trim on the Yankee for the start up until they hoisted the kite.  All was going well until we got to mark rounding and all the other boats seemed to be ready to hoist their kites except us.  Once it was hoisted and we were moving well again the tack blew and down comes Code 1 and very quickly we get Code 2 on the deck and hoisted.  All hands went down except those trimming the kite and we quickly wooled (tied up the 3 sections of the kite so it would not fill until fully hoisted) the Code 1 and got it back on deck.  Code 2 came down and 1 went back up.  By now we are dead last and it has started raining.  Oh well.

Jill waiting to grind if needed to trim the kite as sun tries to hide behind the hills.

And of course a beautiful beginning of the new day.

July 18th it is still rainy off and on and COLD!  Guess that means we are going north again.  Winds are up and down and boat positions are changing every report we receive.  Matt decides on a flyer and next morning we are dead last.  Then major wind shifts I am guessing and next sched (6 hours later) we are in first.

July 19th, early in the morning during our watch  Code 1 blew apart at the head.  The good news was that the recovery to get it back on board was very fast.  Way to go Han, Alex, Ryan, Elaine, Tom, Clem, Westi, Jill, Judith and me!  The bad news was that Jane, our able sail repair person, was not on this leg so we would have to wait until we got to Den Helder to fix it.  Part of the luff was still attached to the head so we brought the head down with it and did not have to go up the mast to retrieve it.

July 20th turned out to be a beautiful day off and on.  Positions still rapidly changing and now it looks as if Seattle and PSP are in the lead.  WOW!

Yankee and Staysail up with Judith, Jill and Elaine ready to trim whatever might be necessary.  Later the winds built.

July 21st was pretty light and a fun day for me as I got to cook dinner with Sean.  Poor Sean though as I was supposed to get out pork chops and instead pulled lamb and beef to defrost.  But, Sean is an awesome cook and decided to make lamb curry and beef curry with my choices of meat.  Wind has been pretty light and we have the wind seeker up.  After playing with it for a while I managed to find a sweet spot where if we eased it out (that let it breathe idea) we could get our speed up to as fast as wind speed and sometimes faster.  That is pretty exciting when the wind speed is 2 to 4 knots.  Only problem was two of my crew mates wanted it brought in more so Westi and I devised a way to sneakily ease it so they didn’t know.  Yes I am bad! but at least we were moving!

Elaine checking trim of windseeker up at the bow.  Westi playing our slowly ease it out game to gather speed.  Later that night there was still no wind and in our desperation to see whales we may have imaged some on the dark baby waves that were evident.  No one is convinced they were there but it was fun to imagine.

And then came some sonic booms!  Below are pictures not of birds but the plane that was making all the noise.  He flew by us and then back up and did a flip.  Alex has it on tape and if I am lucky one day I will have access to it.  Something really different on this trip. 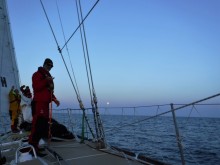 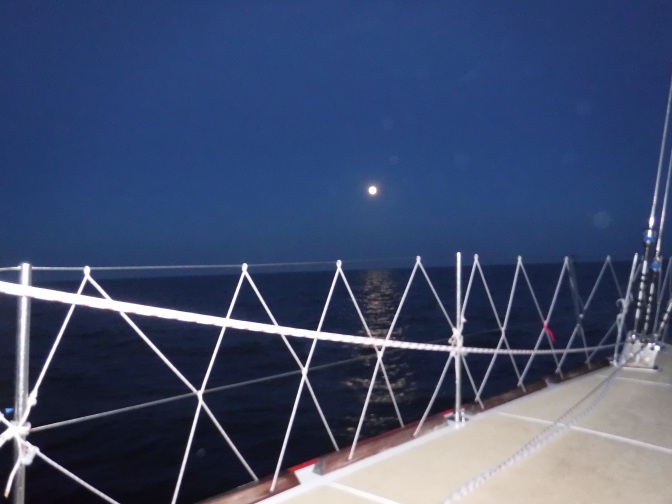 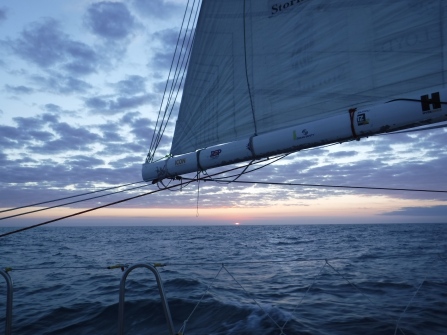 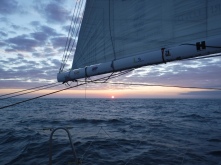 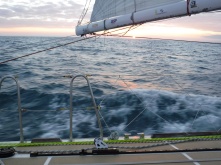 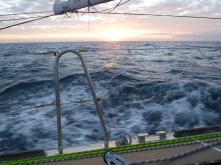 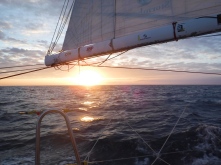 And then there was a wonderful sunrise to experience.  Our shifts were 6pm to 10 pm and then 2am to 6am so I had the opportunity to experience both. 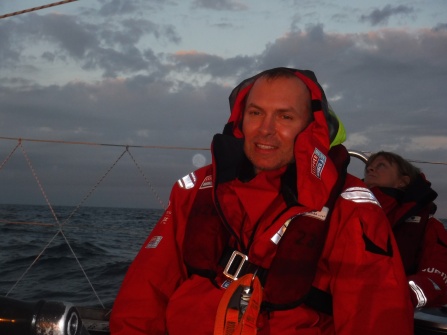 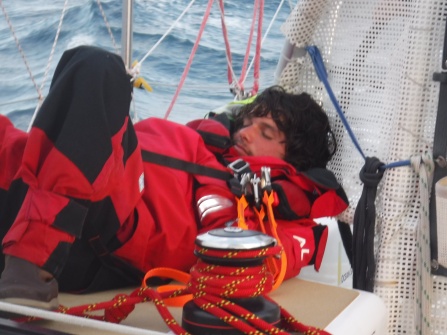 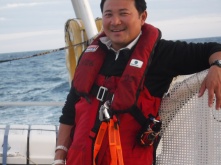 Thought it would be fun to introduce you to my watch.  From top there is Westi, Jill, Elaine then second row is Judith, Ryan , Alex (a bit tired) then bottom row is Alex, Han and me! 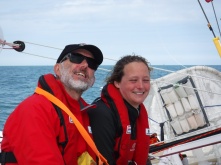 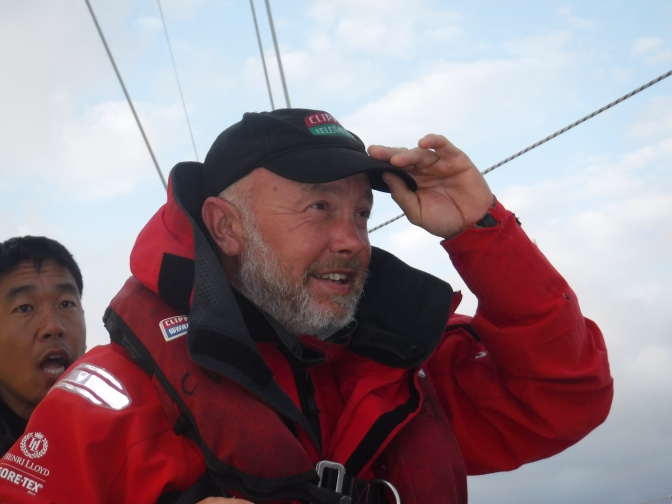 The other watch from top left to right and around is Sean, Clem, Justin, Neil, Kat, Jo , Regina and Justin again with Clem behind.  Tom is missing but you have seen him before.

And of course this wouldn’t be complete without our Skipper Matt. 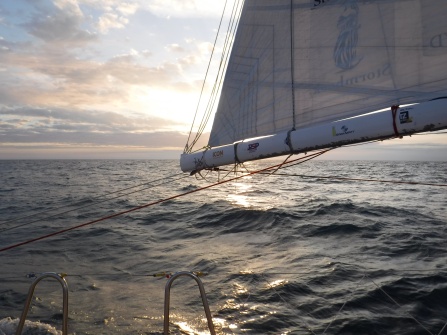 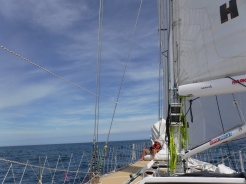 And some random shots for fun and for some other interesting sights.  Yes, there is a sun setting, boat moving quickly through the water, evidence that yes I was clipped on, a local fishing boat, Ryan in the sail up front relaxing, Westi getting ready to enjoy one of our unbelievable meals (I actually think this might have been the lamb and beef curry one) and Scotland or Holland’s version of an oil rig.

Finished the race in tenth place throwing us into a 4 way tie for 5th overall.  The last race should be very interesting. 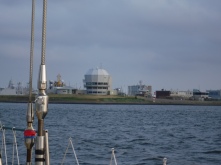 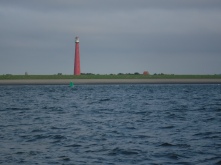 Race is over so all are up top chatting away.  On the way in we saw some interesting architecture and a light house. 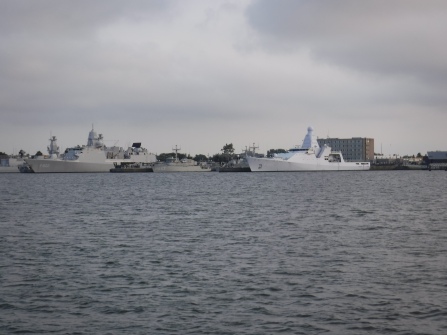 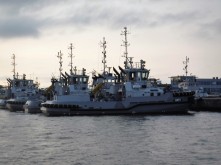 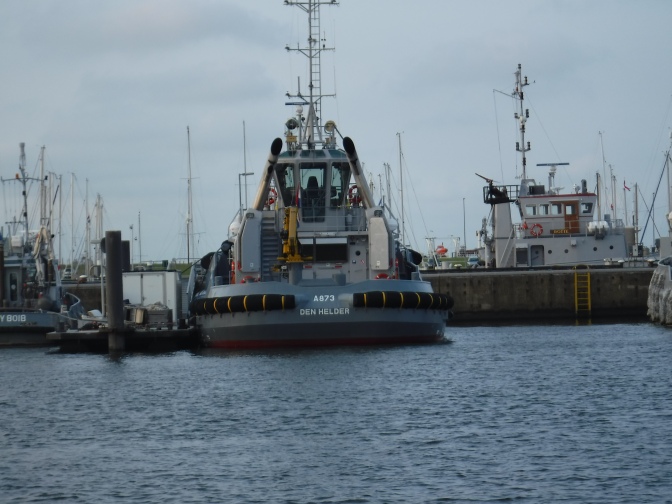 Den Helder is a military naval base for Holland. 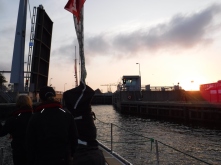 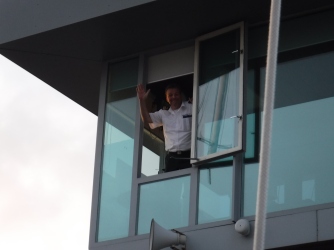 Channel marker storage area and then our heading toward the lock to enter the harbor. 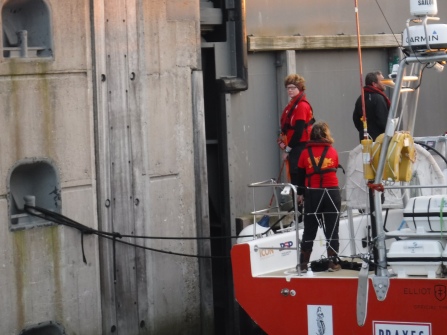 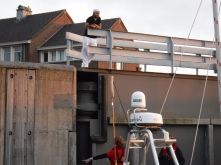 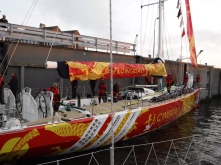 Going through the lock with Qingdao. 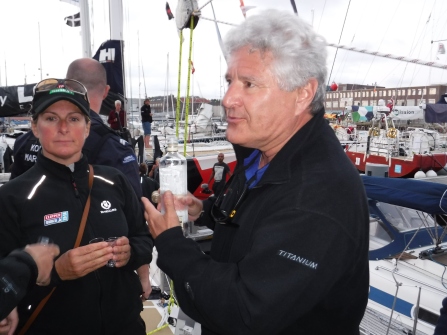 Upon arrival we are met by Edvard who shared a Dutch tradition with us.  A shot glass of Akvavit and raw paling (which is an eel).  The idea is to take a drink and then let the fish slide down your throat.  I managed the shot and then a small bite of the eel.  Interesting but not something I want to try again.

And so it goes, we have now arrived in Den Helder Holland.

One thought on “Derry to Den Helder”