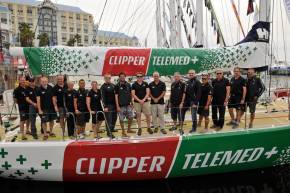 Race start is always interesting as we have a crew briefing where they tell us what to expect as far as weather, wind, the adventure of the sailing and the schedule.  Forecast for start of Leg 3 was prepare for 40 to 50 knot winds!!!  Expect to rock and roll through days of exciting wind and waves and lots of surfing the waves.  This section of the Southern Ocean is the one that will provide you a fantastic and fun Sleigh Ride.  After the mass Crew Brief we had our boat one with new Skipper Matt Mitchell.  He emphasized that we would most likely be in our foulies the whole leg and be ready for cold, rough action.  Be sure that you are double clipped on with your tethers (clip on from life jacket to strap that runs from bow to stern of boat)!  Not a problem for me as Nick A and Tony were already on my case to be safe!!  Cool, we are ready and have only a little trepidation to be doing this with someone we have not sailed with previously.  We believe in the team!!

Reality of the start, and this once again strengthens my belief in a weatherman’s predictions, was 0 to 8 knots, warm and sunny.  Start goes off and everyone is just trying to keep their boats moving.  Then there is LMAX that is flying their kite on a tight reach slowly coming in from the side.  There are two marks close together that we are supposed to go around  after the start.  We make it around with the front of the pack and then LMAX comes in and gybes around the second mark and we are thinking that was really close but they did have room, but they skipped the first mark.  Oh well, fact and reality, their skipper was apparently the only one that knew we didn’t have to go around the first mark.  Hmmm, think that is why they are leading the series?  Duh! 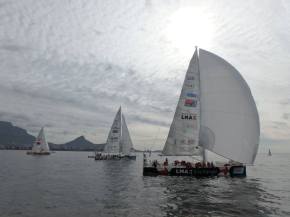 LMAX at the start

We play a slow game of leapfrog with several boats on the way to the next mark and then wind picks up a little.  For the next few hours we are content with being happy that we are ahead of Great Britain. 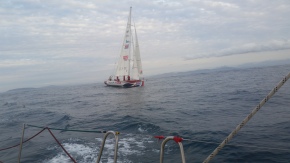 Great Britain behind us!

Continuing on our way we are enjoying watching the seals at play (they go under before I can get them in camera range.  Sorry!) and dolphins having fun. 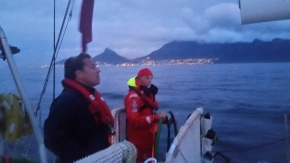 Cape Town in the distance. Dimitri at the helm talking with Matt 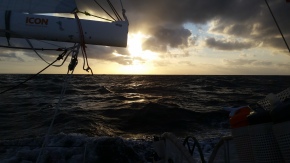 Sunset before the storm

All was at peace when my watch ended and I went down to sleep.  Apparently shortly after I conked out there was an “All Hands ON Deck” call that I slept through and was not awakened as the predicted BIG winds hit!

UNICEF as the storm hits

The next day as crew is now in control.

For me the big excitement was getting up at 10pm for our watch and getting thrown around a bit.  Ended with a smashed ear that caused some excitement as apparently ears bleed!

Now a few pictures to show how much fun we were having. 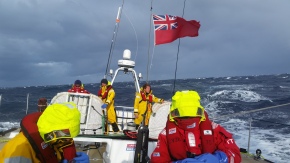 Getting ready for a Yankee sail change

Me all wrapped up and COLD.

Tony and Alex having fun

Nigel is chef for the day. Yea! 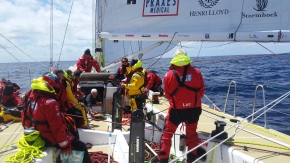 Matt providing a session of learning for us about weather

Just my opinion but me thinks that Matt watches the weather tooooooo much!  In trying to escape the weather he thinks is coming he tends to take us in a circle.   He is a great teacher and shares the information well.   Just know that you don’t sail away from the mark in trying to escape a high pressure system and you cover the boats behind you normally (right Dennis Conner??1983??) 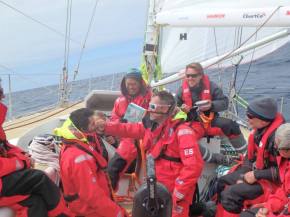 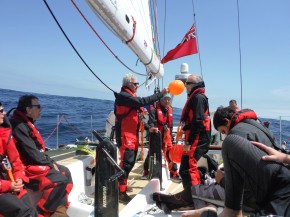 The Birthday boys, Nigel and Luc at play. Just glad my birthday was a week later.

This leg was very interesting as it was one that pushed my patience level to the max a few times. There were only two girls on this leg and a few of the boys thought they were in the boys locker room quite often.  Patience and tolerance are virtues I guess but I did have to finally bring the subject up and life got better.

One of the highlights of this leg was seeing the albatross in the air.  They are amazing to watch in flight as they catch the wind drafts and fly so graciously. 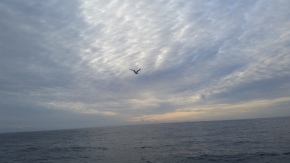 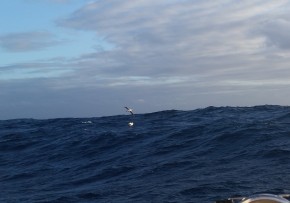 My favorite thing was watching them land. Feet pop down just like an airplane, then they walk on water and then sit down and slowly fold their wings in. Love it!

Also we saw what we think were Stormy Petrols.  Their underside is like a tick tack toe board with white the predominant color and black blurring to gray lines.  If someone has a thought on a different name please share.  No picture as have you ever tried to capture a bird in flight while trying to pay attention to the sails?  I worry about the birds.  It seems they should get tired of flying in circles all day so far from land.  What brings them all the way out here???

Also  managed to end up with an additional job.   I am now responsible for sail repair since Nigel left at the end of leg 3.  really miss him as he was great crew member that has become a wonderful friend!

Nigel teaching me the art of fixing the luff of the kite. And no this is probably not a Bartlett method!

Hey there Fred Schroth, how is this for the use of a laser sail? This was what we cut up to fix the luff on the kite. pretty interesting hun?

The best day of sailing was on my birthday.  We did a lot of rock and roll, water spray and heavy winds.  Best sleigh ride and only one to happen on this leg!

Weather was mainly cold and wet so yes I was cold and damp most of the time.  Did learn a trick from Nick R though.  Hot water bottle in pouch and just put those hands in there when you need to.  There is no such thing as a waterproof glove in my opinion.  I gave up on the gloves after a few days and went into putting hands up sleeve arms and in and out of pouch with a hand warmer (thanks John Parker for sharing those last year at Canyon).

Overall it was a strange leg as the weather did not do anything it was supposed to or we were not far enough south (remember that south is getting close to Antarctica).  Supposed to be stormy with huge waves (and if you knew this you signed up why??).  the big hit that first night went from around 5 to 10 to 80 in just seconds apparently.  But it also backed down after a bit and soon we were slowly going in circles.  It was so disheartening to look at the radar and see our path.  Seriously it was zigzag and in circles.   Next to no wind and I thought we would never leave Africa coastline.  Was ready to ask if I had time to do a quick safari while we tootled around.  This was supposed to be in the doldrums, not the Southern Ocean!!

Finally we hit some good wind and rough seas.  It has become interesting.  The boats rocks back and forth, so sleeping is like being rocked in a cradle.  Remember those days?  However when we would get complacent a big wind would hit and some would get thrown out of their bunks.  Right Tony and Elaine!  Remember November 12th!

On deck we sometimes get hit by a super wave and get moved a bit.  Double clicking with the long and short tether both has kept me from being thrown across the boat.  Today Dimitri was hit by a wave and his life jacket popped open.  The guys working on the bow are now coming back with life jackets that popped open after being hit by waves.

Watching the bug waves has been fun as it reminds me of the movie “Perfect Storm”.  I feel as if I am there.  There will big valleys/troughs that are created at times,  sometimes the rail of the boat is under and boom crashes through the water and the wake of the boat gets pretty awesome looking.  Sometimes you just see this giant wave forming behind you. All is exciting and fun to watch nature unold. 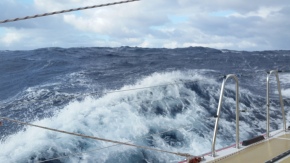 Waves building behind us

Skipper Matt likes to keep me out of trouble so he keeps finding little jobs for me to do as a challenge.  How about a 6 foot doughnut for the staysail strap (attachment from deck to staysail).  Lucky for me, Ryan had sprained his ankle and needed something to do so I enlisted his help.  After all he went to the class to learn how to do this stuff and I didn’t. 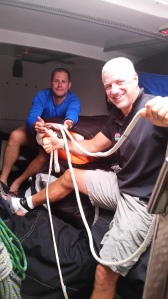 Ryan and Barnaby showing off the 6 foot doughnut we made

So much for now.  We leave for Vietnam in the morning.  If I can get over here (the only place my Surface will connect o WIFI I will try to add more.  Boat time is 9:30 am and after the parade of boats we will be motoring 150 miles past the Great Barrier Reef to do a LeMans start and the race will begin!

Back Mid February.  Until then Happy MLK day and Happy Valentine’s day!

One thought on “Leg 3 Cape Town to Albany Australia, Part 1”