Okay all, I know that I am in Albany, Australia and you are waiting for more updates.  However, due to our little trip to the north during Leg 3 to sneak by the high pressure system and feel good when everyone else got stuck in it, this move backfired on us and we were stuck for days, finally had to turn the motor on and I lost count but think we took 4 to 5 days of motor and sail to finally get to Albany! So only here for 2 days so far and Robert, a retired sea captain here in Albany has graciously allowed me to utilize his place to work on blog. Actually we met because he made a comment about Columbus Anan the use of sextant and compasses on the London to Rio part of my blog. If you would like some interesting history check out his comment! 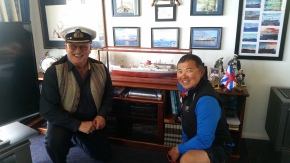 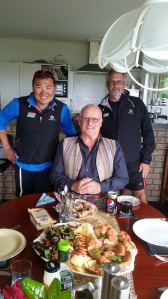 Han, Robert and David and the awesome lunch that Robert prepared for us!!

So we finally made it there! 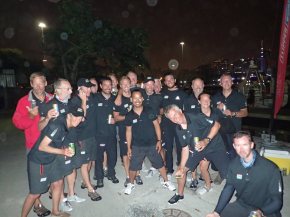 We made it though at 2 in am 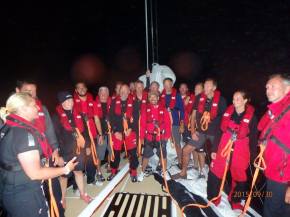 We made it to RIO!

Friend Emily Lynch  from Austin met us and even had a condo for several of us to stay with her. 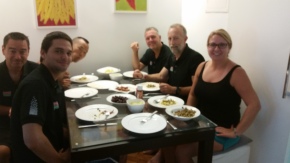 Crews and friends greeting Icharcoal upon arrival in Rio after tragically  losing a crewmember on the first leg. 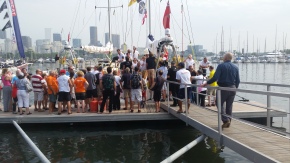 Greeting ICharCoal upon their arrival. Lots of tears and hugs.

So how was Rio?  The city seems to go on forever!!!  No matter where you look there is more of Rio hiding behind another hill. 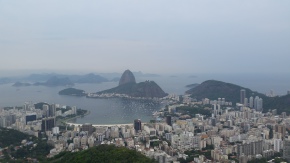 One view that shows a part of Rio.

An entirely different view. Seriously, no matter which hill you looked behind there was more of RIO!

Due to Javier’s Portuguese vocabulary on a day off, we ventured up to see Christ the Redeemer. 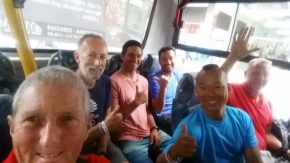 Happy on the bus 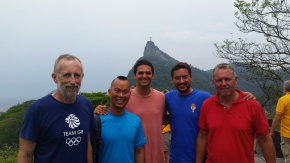 Christ the Redeemer from a distance.  Nigel, Tony, Alex, Javier and Mike 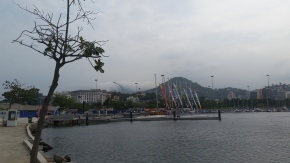 From another distant view with the fog rolling in.  The statue is right in the middle of the fog that is cascading down the hill. 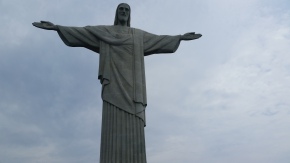 Up close and personal!  Pretty amazing.

After our jaunt up the hill we found yet another restaurant that served their famous meat cuts.  I believe that we hit at least 4 or 5 of those places.  All GOOD!

The there was the crew party that happened on a Friday night.  Made me feel like it must be half-time!  Just cannot get away from that band thing! 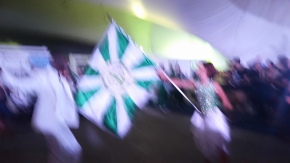 Yes the picture is blurry, but the flag was moving too fast to catch a pose. 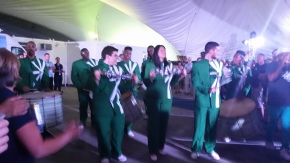 And of course ….Drumline was there! 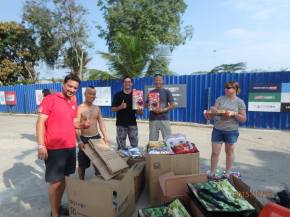 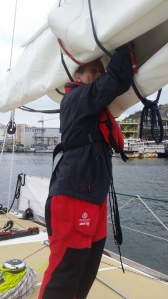 Me trying to get reef knot undone so I could add anti-chafe on the line. 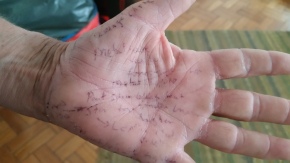 So, where do you write all the information on the rig check when you don”t have paper? 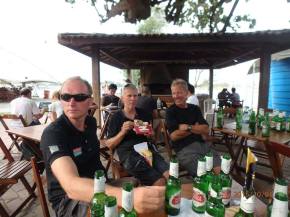 Lunch at the marina? or maybe break time? 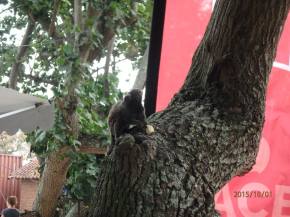 And he is out looking for food! 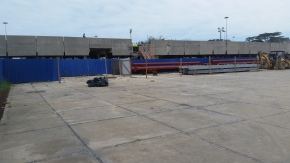 Preparations are in full swing for the 2016 Olympics 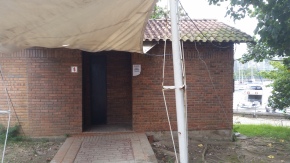 I just hope that the restroom situation improves! 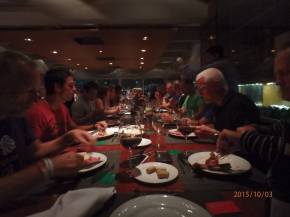 Celebrating Skipper Diane’s birthday and yes it was a Brazilian Steakhouse! 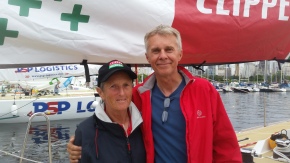 Bunk Buddy for Leg 1, Chris Geary. Have missed him!

So long Rio!  I had fun there and the people were friendly except for the ones that mugged people in the park next to the marina.  Emily and I had a walk through there in daylight and when a groups of about 6 approached us I withdrew my trusty Brad Davis knife that opens with a flick of the wrist and started playing with it.  They passed us by.  Others in the event and some family members were not so lucky.  Best wines for a great 2016 Olympic event! 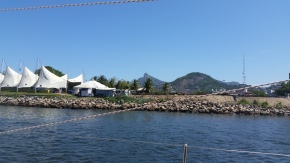 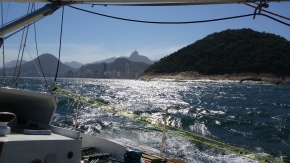 One last look before start of leg 2!

To really keep up to date go to the http://www.clipperroundtheworld.com website and read the Crew Diary and the Skipper Reports for Clipper Telemed and other boats.

Also remember to check out the Donate link on this blog and support one of my charities!!!  See you in Sydney!!

One thought on “Time in Rio” 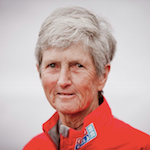