We are getting closer!

The journey was much different than what I imagined.  I thought that we would have decent wind and weather until we got close to the Equator and the Doldrums (area of no wind). Because of some boats getting really stuck with no wind in the Doldrums in the 13-14 race, they made a new rule this year.  All boats could motor 60 hours through the Doldrums and thus save the heat issue and the no wind issue.

There was a certain path that you had to take and once you started you had to end up a certain spot and if early you had to hang out there until time for you to exit.  I am not sure who comes up with these ideas!  However, Mother Nature wanted to be sure that we felt the discomfort of no wind and extreme heat so she decided to hit us with no wind several days before we even got near the Doldrums.  UNBELIEVEABLE!!!  Especially since as we motored through the Doldrums there was WIND!

My friends on Lake Travis, this was like a no wind day that lasted forever and you couldn’t turn your motor on and run back to the cool shade at AYC.  My marching band friends, this was not even a fun day on the asphalt in 104 degree temps and bright sun.  This was truly the most miserable hot weather I have ever endured.  All of us must have seated off 10 to 15 pounds.  Below deck was even worse than above deck (you see we did not have air conditioning on this happy boat)!  The cool think was we were barely moving so we got to dump some buckets of water and take “kinda” showers.

Ryan enjoying the shower.  It had the effect of the Ice Bucket Challenge!

Then the whole crew got into it. 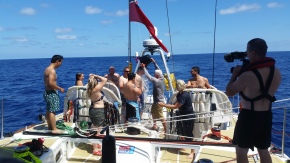 At least everyone smelled better!

Then laundry became the thing to do as we waited for wind.

laundry plus just a good shot of nature at its best.

Mark our Canada Discovery Channel man finding socks very important in the documentary that he is working on.

For bunk buddy Chris and I and our buddies on the above bunk, Mark and Jenko we had the added excitement of sleeping (if you could) right by the engine room.  Leg 1 was a test of sanity for Justin (our engineer though really he just started learning about engines a few months ago) and Skipper Diane as they spent many hours working on little issues including having our generator go out so that we then had to run the engine in neutral to charge the batteries.  Just imagine 6 plus hours of generator or engine running next to your head!!  There were times though that we were so tired that we did sleep through it all!

not 3 feet from my bunk and when they worked on it the door was OPEN!!! and this is just art of the view.  there is more to it for about 6-8 feet.

However, not all was bad, the wind was like the stock market.  Up and down, flat and bouncy.

check out the waves as we go by.  This was fun! 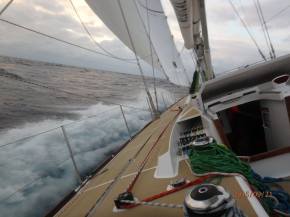 Moving along! so not so bad!

And if you can believe the next picture of inside the boat during a bit of wind this was a fun ride!  Can you make your jackets stand out like this?

Looks a bit like a small hurricane inside the boat.

And then we had the privilege of helping out Mission Performance when their Water Maker went out and we had a spare one.  They had to come back to us to get it so we got to see another boat after days of no land or boats.

They put candy in the bucket for the return to our boat.

And then there are just some beautiful moments like being with everyone and seeing a rainbow. Life is GOOD

Enough for now, time for some sleep.  Temps are warm in Cape Town during the day and cool at night.  A beautiful place!