So, to continue.  Life at St. Kat’s docks was always fun and one never knew what would come next!  Whether it was work on the boat, standing at the gate waiting to be let in or out as we only had a couple of fobs to use to get in and out, or waiting in the long line for showers/toilets.  You thought I just liked getting up early?  Actually discovered a great reason to get going early! Early riser got the showers without waiting!

Spent some time with friend/crew mate Judith from London.

Had to get a picture of this. On the way to Judith’s and she was beginning to think that there are no rainbows in Texas since I stopped in middle of street and took a picture.

Not sure why but I was fascinated by this rainbow!

As payback we ate at a favorite place of hers.  Actually I think she was trying to impress me about the history of pubs in England!

Do we have anything in the states that can beat that date??

The extra bags at her feet are my London leavings so I could pass weight on bag to go (25 Kilos).

Now an interesting video to watch.  Moving the boats in St. Kat’s Dock.  This happened daily with some boat or other.  This is one of about 4 moves that we had to make. I am afraid that I need to contact Doug to see how to get this one on.  It maybe too much for the program to handle. 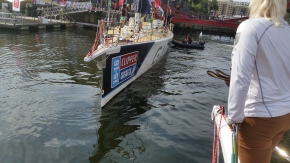 For now, see how close they are, the little rib in the back right nosing it around and in general a possible close encounter.

So til then, Some of the fun things we got to do while waiting to start the race. 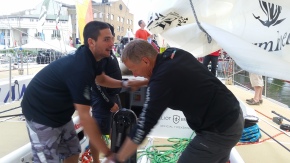 Alex and Doug in grinding contest 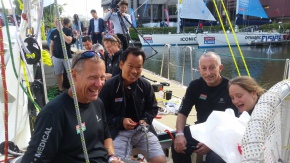 had a little help from my friends! working on reefing lines! THANKS!

For all my percussion friends, do you think this is what xylophones were made of at one time? Or the owner played one? 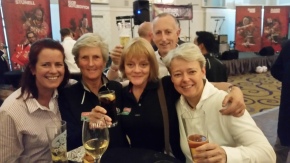 And would you believe,  there is an Aggie Round the Worlder sailing on UNICEF.  Meet Drake! 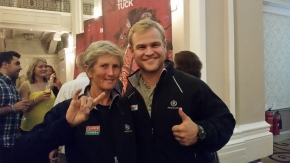 Meet my Aggie Friend DRAKE! Class of ’14! and like a true Aggie, he proposed to his girlfriend prior to leaving on this trip and plans for wedding are…. next fall on hopefully an open weekend for football!

Great guy from Houston and Is now growing a beard and looking real authentic!

So you will be anxious for next update…the ceremony out of London, check this out you band friends and especially percussionists! 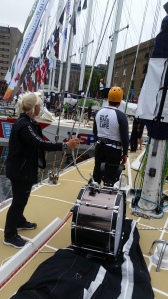 Check out the other masts!

2 thoughts on “Almost out of London”