Obviously we were having way too much fun here at the Clipper Festival.  The sad news is that the grant that they had to put the festival on has run out and the future looks rather quiet for this event.  Keep your fingers crossed that it will somehow return. 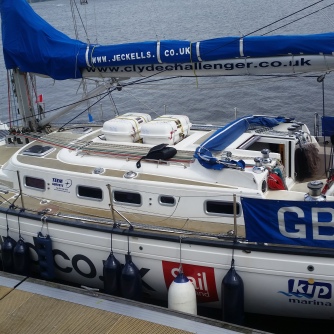 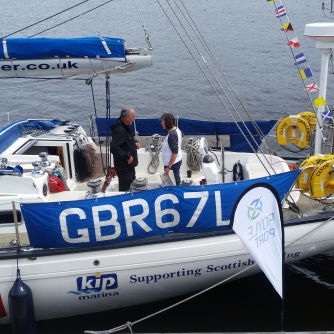 The first version of the Clipper Round the world race boat.  It is a 60 foot boat and I am not sure how many crew.  Clipper has come a long way in developing the event and the boat!

Different views of our sleek racing machine the Clipper 70.  Quite a change.  So I am providing a little history.  It’s good for you!

And here are some of the adventures that you can have while at Derry!  You can be the pirate or just do some paddling around in one form or another.

And my first glance at SAILability.  Sailing for disabled of all ages.  They are made in Australia and have a special seat that lays back and a joystick to steer with. 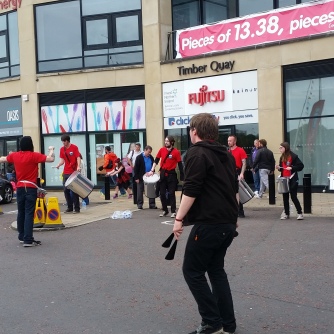 All kinds of events happening from Pirates to drumlines to Orange Parade with Percussion and accordion bands to weddings on the pier.  Can’t ask for much more than that. 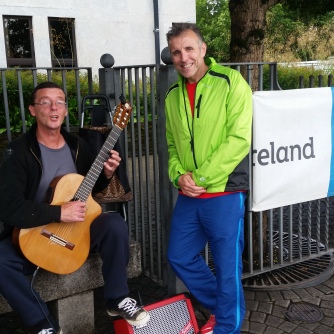 Musicians everywhere.  Even came across  Irish Paul listening to his friend play guitar.

Then there was a recruitment sail to take people interested in the adventure out for a trial run.  Some were just about ready to sign up and definitely should. They had a chance to do some winch grinding, hoist sails, tack and gybe.  Then of course they learned to bring down the Yankee in a very wonderful way as taught by Jo.  A really fun day for all of us!  I look forward to checking the crew website for the 2017-18 race to see if I recognize any of these fun people.

Patsy and Nick Rainey (crew legs 2, 3, 4) with Regina (crew legs 4 and 8) and then RTWs Gavin and Kat with Kat’s sister.  Discovered that Nick was a sculptor and after seeing some pictures from his gallery know that he is also an amazing artist as well as sailor.  Gavin is the young man that rescued a man stuck at the top of a mast during the Hobart to Airlie Beach race.  His boat Mission Performance answered a mayday call from a non clipper boat and went to their rescue.  Gavin then proceeded to work with the man for a couple of hours to get him down safely.  Great young man.

Monuments everywhere and they remember all servicemen from all countries.  I had trouble getting up on the chairs for this table.  Think it might be for Jack from Jack and the Beanstalk.  However I did have some great ice cream and pizza with no egg on it!  The church is actually a fitness center currently. 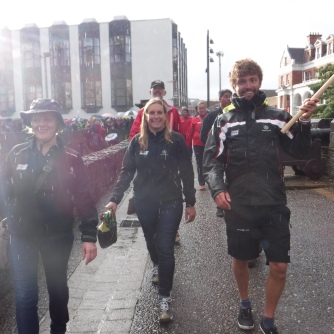 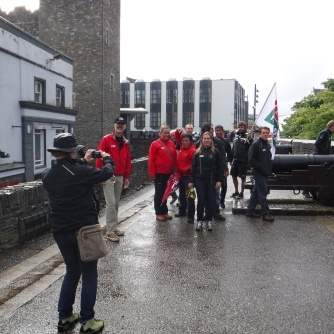 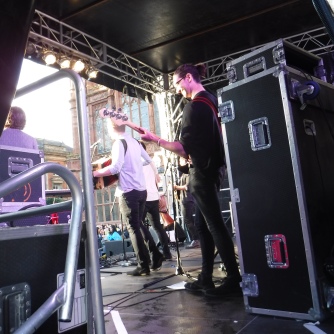 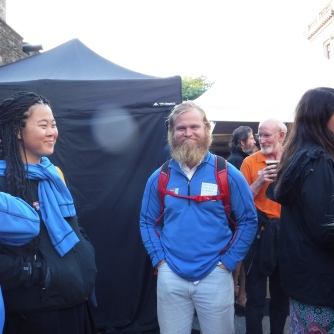 Then the awards ceremony that included a parade in which we were the participants.  We went through the old town with bagpipes and drums and ended at the square where all the music events had taken place all week.  Of course there was a drumline warmup, then Judith and Elaine helped lead us down the path.  As all parades do, they stop for some reason.  Lucky for us there were no horses at the front of this parade.  Just other boat crews.  Up in the tower were the Clipper media crew taking pictures of the event.  And of course I couldn’t leave out a shot of my Aggie friend Drake who was crew on UNICEF.  Go Telemed. 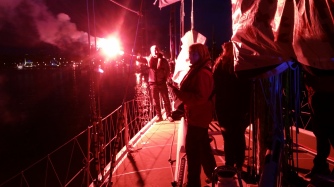 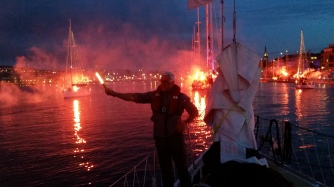 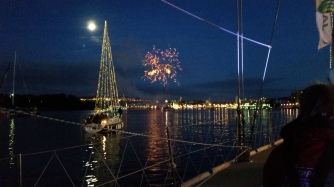 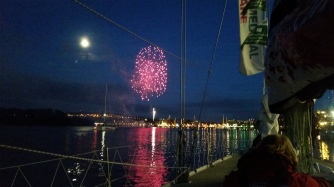 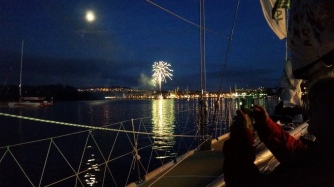 The River Foyle will be transformed into a magical, mythical stage tonight as the Clipper Race fleet takes the lead role in the theatrical finale to the Foyle Maritime Festival 2016, The Voyage of Sunniva – Night of the Two Moons.

Sunniva was a medieval Irish Queen, who, when an invading king wanted to marry her, fled with her people in small boats and without navigation, trusting to her god and to the elements.

Their journey took her north through storms and conflict to the caves of the Norwegian gateway island of Selja. Later, when armed men came for them, they hid and prayed for their caves to collapse, which they did saving them from being ravaged.

The legend then tells of the island glowing with light, of sweet smelling bones and years later of her intact body being uncovered seemingly asleep and being transported to the new cathedral in Bergen, of which she is now the patron Saint.

St Sunniva is a maritime saint and there have been various craft named after her.Tonight mysterious figures will walk the Quayside before joining their Queen for a final parade of light on the river as Sunniva and her followers prepare for their journey.

Derry it was a pleasure being your guest.  Great people and amazing town.  Thank you!

6 thoughts on “Do I Really have to Leave DERRY?”